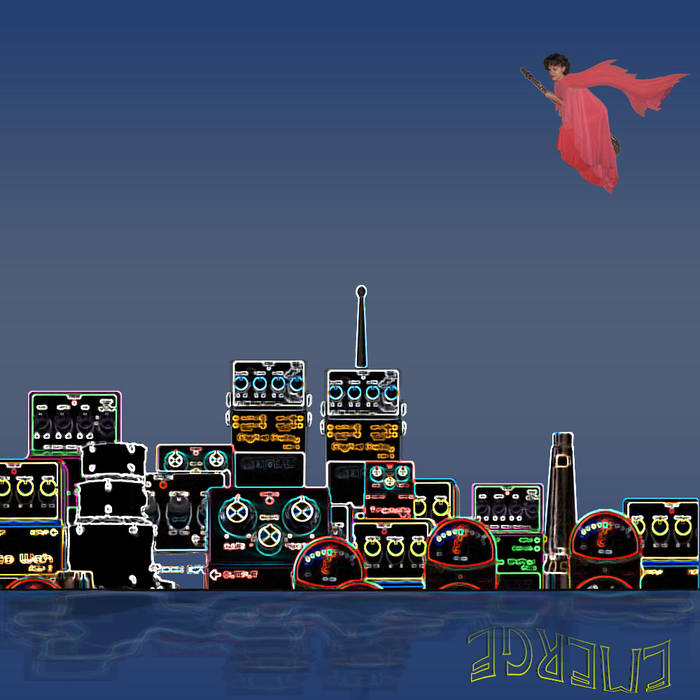 Emerge is Vanessa Boyd's entire set of music written and performed on the Moroccan hajhuj. Recorded live in Boston with Kyle Marshall on drums, the goal of World Trance Americana was to create a fusion of what VB learned from the ritual trance of Gnawa, the loose rock and roll leftover from Vanessa Boyd & the Yes Men in Appalachia, and life in New York City.

The Hajhuj [hajhouj, gembri, sentir]:
Electrified and Amplified
For any technical musicophile, the hajhuj is an instrument I brought back from Morocco that is used in Gnawa music, a ritual music of the Sahara.

It's a bit like a bass banjo; it's got three strings, one of which is the short drone string, and they're made of gut. The front is made of hide, usually goat skin, and the back is rounded wood. The neck is tubular and has no frets, and is originally only tied on to the head with leather straps. I tune mine to D (75 Hz), drone D3 (146.9 Hz), G2 (98 Hz).

My first adjustment was to have tuning pegs installed, which required some creative thinking because the drone string is attached to the neck in the middle of the three strings, so a peg there was impossible. We decided to put it at the foot of the body, below the sound hole.
The next thing was to find a good way to amplify this wise old acoustic instrument. After a few failed attempts, I found the K&K cello dual transducer worked best, with one placed inside the sound hole and the other in the center of the bridge. I ended up putting electrical tape along the wires leading to the quarter inch plug because they pickup noise. When amplified, sound techs need to watch for low-end feedback.

What's the difference? Emerge vs Pleasant Stay Hotel
Some of the tracks on Emerge also appeared on the 12" vinyl record, Pleasant Stay Hotel (2009). Emerge is a live recording after working the songs up with Kyle on drums. On tour we were joined by Cellist Brian Teoh.